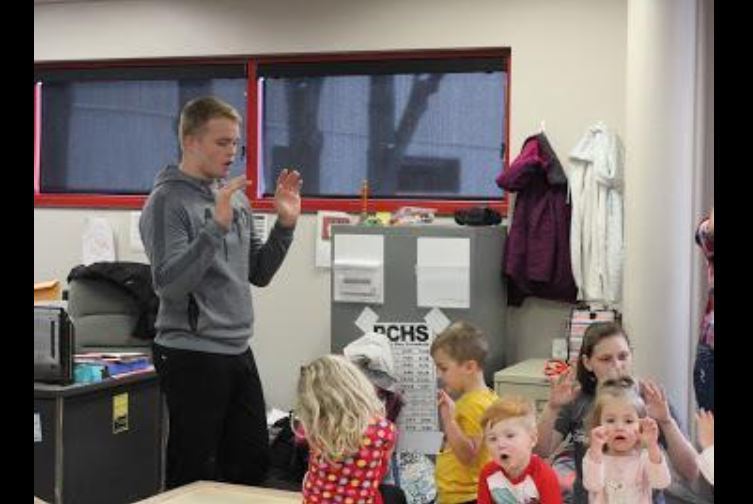 The Pekin senior placed twice in the Class 3A state wrestling tournament, finishing second this past season at 182 pounds after a sixth-place finish at 195 pounds as a junior that ended the Dragons’ 18-year state medal drought.

Dowell’s remarkable runner-up run in the state tournament in February at the State Farm Center in Champaign led him to commit recently to McKendree University, where he will join one of the top Division II wrestling programs in the country.

Off the mat, Dowell isn’t so tough.

But that’s fine. The 18-year-old is patient and kind, necessary attributes for working with youngsters just starting their journey in life.

He worked in a day care setting with children of Pekin teachers and staff members. The children ranged in age from 6 months to 5 years.

“All the little kids looked up to Jared and listened carefully to him, probably because he’s soft-spoken and patient,” Meyer said. “Jared was quiet and shy when he first started in the class two years ago, but he grew into someone who knew automatically what to do in any situation.”

Dowell’s young fans knew he was a wrestler, and that he played football for Pekin.

They cheered for him in February during a march through Pekin’s halls before he left for the state wrestling tournament.

Several learned about football from him last year when Dowell came to class with his Pekin football uniform and explained the purpose of each piece of equipment.

Some kids call Dowell “coach.” He’s been the coach of ages 5 to 13 house league baseball and soccer teams at the Boys & Girls Club of Pekin since he was 15.

Dowell’s career goal is to be an elementary school teacher, mostly likely for grades first through third, or perhaps a social worker.

There aren’t many males who are elementary school teachers. Dowell was one of only three males among 40 students in Pekin’s child care classes this school year.

“I want to have a positive impact on kids. Point them in the right direction,” he said.

Dowell’s passion to help is fueled by tragedy.

He was 11 and in fifth grade when his father, Scott Dowell, died at age 55. Since then, Jared said, he’s been blessed to have many men, including coaches, step up and guide him.

Jared said his father suffered a heart attack while retrieving medication from his car and was taken by ambulance to the hospital.

A U.S. Army veteran of more than 20 years, Scott Dowell was a heart transplant recipient in 2008 and an advocate for organ donations.

“I could always hear my dad screaming during my matches,” Jared said. “But I looked up into the bleachers after a match (in Rock Island) and he wasn’t there. I had a feeling something was wrong.”

Jared didn’t drop out of the tournament and go home after his father died. He said he knew his father would have wanted him to continue to compete.

He won his last two matches in Rock Island and a state championship in his next tournament. He didn’t lose the rest of the season after his father’s death.

“My dad was watching over me,” Jared said.

Jared points to the sky during his wrestling matches, honoring his father.

About a month after this year’s high school state wrestling tournament, Jared got a tattoo on his right forearm that lists his father’s birth and death years and depicts an angel’s wings.

“The wings show that my father is an angel looking over me every day and they’re an infinite sign because I’ll love my father and remember him forever,” Jared said.

“I know some people don’t like tattoos being visible, but my tattoo has a significant meaning for me and I wanted something I could see every day on my body to remember my father.”

Jared said McKendree University, which has an enrollment of 3,000, is a perfect spot for him for both wrestling and academics.

Plus, Pekin wrestling teammate and longtime friend Ryan Haynes is going there to wrestle, and he’ll be close to home even though McKendree is about a 2½-hour drive away in Lebanon.

There’s a fire building within Jared to make amends for being pinned in the 182-pound Class 3A state championship match by No. 1-ranked Trevor Swier of Lombard Montini, who will be a Division I wrestler at the U.S. Naval Academy.

The loss bugs Jared even through he became the first Pekin wrestler to be in a state title match in 22 years and he gave Pekin wrestling coach John Jacobs an opportunity to participate in the state tournament’s Grand March for the first time in Jacobs’ 20 years as the Dragons’ coach.

And, Jared overcome huge odds and a painful injury to get to the state championship match.

He was the only fourth-place sectional finisher to wrestle for a state title in Class 3A, and he wrestled the entire state series with a broken bone in his shoulder.

Jared’s path at the state tournament to the championship match included three straight victories. Those wins gave him a 40-5 record for the season and a 101-31 career record in four years of wrestling for the Dragons.

“Going into the state tournament, I wasn’t 100% sure I wanted to wrestle in college,” he said. “Finishing second is what made me want to do it. I know now that I haven’t peaked yet, and I need to work even harder if I want to be a national champion in college.”