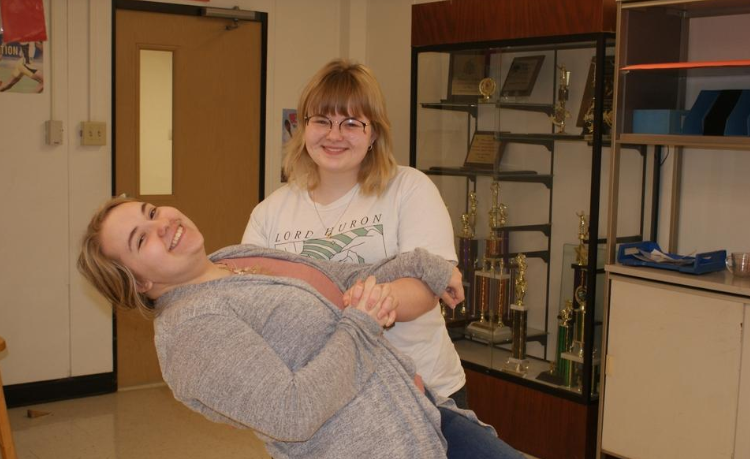 Pekin Community High School’s S’Pekin Dragons have become something of a fixture in state speech competition. This year is no exception, as PCHS senior Nevaeh Mankle and juniors Elisabeth Sandoval and Kaitlyn Heaton qualified for the competition.

“We are lucky that we have hard-working, dedicated students who love speech,” said PCHS speech coach Scott Pyle. “It’s a different activity, but I think it’s very valuable. I’m extremely proud of all three of (this year’s state qualifiers).”

Heaton returns to state after qualifying last year in Humorous Duet Acting. The category is the same this year, but Heaton’s 2019 partner, Madison Rudloff, has been replaced with Mankle. Together, they perform a skit called “Furry Tales With a Twist,” a play within a play where a dropped and scattered script leads to serious fractures in traditional fairy tales. Heaton believes she and Mankle make an effective team because they take turns as the duet’s driving force.

Mankle, after being a S’Pekin Dragon during her sophomore year, took a year off before returning to the team as a senior. During her junior year hiatus, she kept her speaking skills honed by performing in PCHS theater productions.

″(Coming back) wasn’t that hard,” said Mankle. “Speech is almost second nature for me.”

Mankle added that she is somewhat overwhelmed to have been selected for state.

“I still can’t believe it,” she said. “This is a really big accomplishment for me. The fact that I have this opportunity is breathtaking for me.”

After narrowly failing to make the cut for last year’s state competition in Radio Speaking, Sandoval elected to change categories. The shift of focus was clearly an astute decision, because Sandoval qualified for this year in two categories: Informative Speaking and Original Oratory.

″(Radio Speaking) wasn’t super-consistent, and I felt more confident in the other events,” Sandoval said. “After last year, I said to myself ‘I know exactly what I’m going to do next year. I’m going to work really hard, and I’m going to state in two events.’ Now, that’s exactly what I’m doing. I’m very excited to show what I’ve been working on all year.”

In contrast to the S’Pekin Dragons, East Peoria Community High School had last seen one of its students qualify for state competition in 2010. That 10-year hiatus was broken by freshman Sidney Draksler, who qualified in Radio Speaking by placing third in sectional competition.

“Basically, they gave us a packet of information of different stories and we compiled our own newscast,” said Draksler. “We had to come up with our own radio station and sometimes our own ads.”

Draksler added that when she joined the EPCHS speech team, she began with Informational Speaking, but did not feel like it suited her. While she was reading aloud, EPCHS speech coach Adam Schneblin noticed the clarity of her voice and suggested she try Radio Speaking, where she enjoyed remarkable success.

“Sidney is very, very smart,” Schneblin stated. “That allows her the ability to quickly adjust and come up with concepts, which makes her a really good radio speaker. I couldn’t be more proud of Sidney and the way she has learned and adapted and taken criticism and comments. She’s learned from that and she’s gotten better and better.”

Qualifying for state competition as a freshman suggests that Draksler will evolve into a formidable speaker in future events. She and Schneblin seem to be in agreement that she should branch out into other categories.

“There are many events that speech, as a whole, has to offer,” Draksler said. “Next year, (I’ll try out) different events like Humorous Duet Acting or Declamation. There are a bunch of different events and I’m probably going to experiment with them at the beginning of the season to see what has the best fit.”

The IHSA state tournament began Friday and will continue through Saturday afternoon at the Peoria Civic Center. For more information and final results, visit www.ihsa.org.