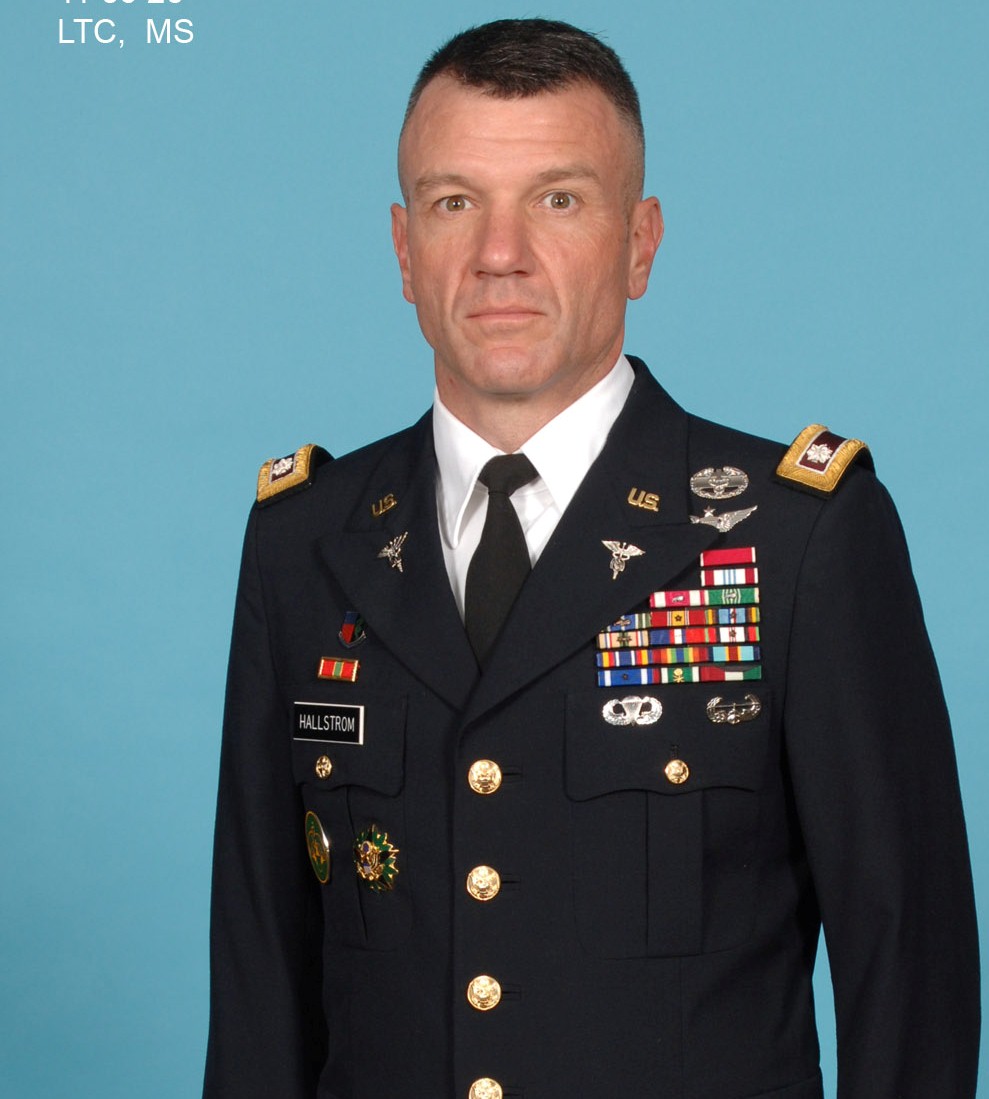 LTC Larry Hallstrom is originally from Knoxville, IL and graduated from Knox College with a Bachelor of Arts Degree in Psychology in 1989. He was commissioned Regular Army (RA) in the Medical Service Corps (MSC) through ROTC as a distinguished military graduate in May of 1989.

Upon completion of AMEDD Officer Basic Course at Ft. Sam Houston, TX, he served as a Medical Platoon Leader and Troop Executive Officer in the 3rd Armored Cavalry Regiment at Fort Bliss, TX. During that time, he deployed as a platoon leader in support of Operations Desert Shield and Desert Storm. Upon returning, he attended Initial Entry Rotary Wing training at Ft. Rucker, AL. After completion of flight school, he was assigned to the 82nd Medical Company (Air Ambulance) at Ft. Riley, KS. He completed the Aviation Officer Advanced Course as the distinguished honor graduate and afterwards was reassigned to 5th US Army as an AC/RC advisor for Army National Guard MEDEVAC units for two years. He then served as an S3 Air and Personnel Officer within the 1st Medical Group at Ft. Hood, TX. While at Fort Hood, he deployed with the 36th Medical Evacuation Battalion in support of Operation Joint Forge during Stabilization Force Five (SFOR V). He later served as a Career Manager at United States Army Total Personnel Command (PERSCOM) in Alexandria, VA for the Medical Service Corps Branch. Following this, he commanded the 68th Medical Company (Air Ambulance) at Fort Wainwright, AK. He then served as the MEDEVAC Plans and Operations Officer for the Office of the Chief Surgeon, ARNG Directorate in Arlington, Virginia. He later deployed in support of Operation Enduring Freedom as the J3 Air for United States Forces- Afghanistan. From September of 2009 through 2011, he finished his military career as the Chief of the AMEDD Basic Officer Leader Course (BOLC) at Ft Sam Houston, TX. After retirement, he now serves as the Senior Army Instructor at Pekin Community High School as part of the U.S. Army Junior Reserve Officer Training Program (JROTC).

LTC Hallstrom is married to the former Kimberly Lyn Bican of Galesburg, IL. They have three children.