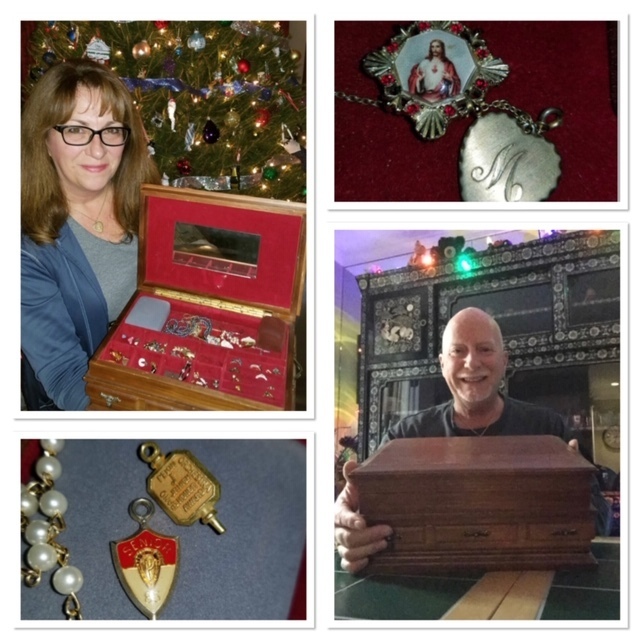 On December 4th, the PCHS Facebook page received a message that said..

“This has been for a long time something I have needed to do, but procrastinated on in life with family, work, etc…”

Bobby Morrison continued writing. “I reported to the Chicago Recruiting Battalion for the Army in 1991.  I had transferred from Letterman Army Medical Center at the Presidio of San Francisco, CA. Of course, some time after arrival as is customary, I was going through my belongings from delivery and discovered a box that wasn't mine.   I never found out who the box belonged to, but I would like to return it to its owner. It's a jewelry box and I have accumulated some potential info about the owner. I'm hoping I can provide some info based on jewelry pieces inside and this person can be found and I can get her keepsakes she thought lost.” Bobby provided us with pictures. They included a 1985 Pekin high senior charm, a locket and a charm that said Band and Orchestra. He had tried finding this person based on the initials MM. However, he then sent a picture of a locket that had the initials MRM. A quick yearbook search found a 1985 graduate, Michelle Rockhold who was in band and orchestra.  A Facebook post was made on the PCHS page asking anyone with information about 1985 graduate, Michelle Rockhold. Within hours, former classmates and family had tagged Michelle Rockhold Stark and her husband, Ray Stark Jr.

In 1991, Michelle and her family were moving from Hampton, Virginia after her husband finished serving in the military during Desert Storm. When the movers came, she removed some valuables from her jewelry and put it in with the other things to be packed and moved by the military. She always wished she had put it in the car. However, the car was full with a car seat, stroller, and crib for their daughter, Chelsea. They moved back to Pekin. When their households goods were finally unpacked after buying a house, Michelle noticed the box was gone.

Bobby Morrison retired from the Army as a Sergeant First Class after twenty years of service. He then continued working a civil service job, finally retiring to Dayton, Ohio. The jewelry box had travelled with him from Chicago, Clarksville, TN and Dayton.

Bobby provided his phone number for Michelle to call him. Michelle called Bobby and he asked her to describe some things in the box. She so desperately wanted the box to be hers, but wasn’t sure about all of the items that were in the box. It wasn’t until her asked her about a religious pendant. She described it perfectly. “The keeper of the box knew it was mine.” Her mother gave it to her when she was a child. She looked at it often. In fact, she just went to decorate her parent’s graves for Christmas and still remembered that pendent.

The box was delivered to Michelle yesterday on 12/12. She messaged me and said she could barely wait to open it. It was opened last night in her home in Washington, IL. Bobby’s one goal was to get the box to the owner by Christmas. Pekin Community High School  was thrilled and honored to get this long lost Christmas gift back to its original owner.