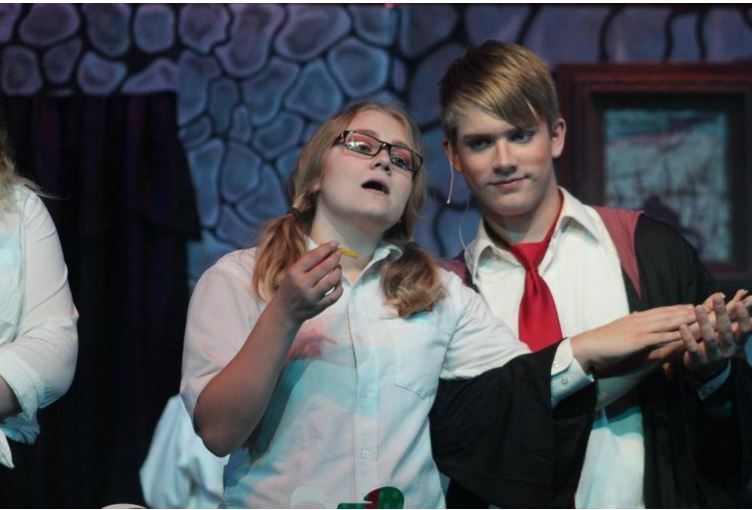 Pekin Community High School’s fall play is a comedy with potions and broomsticks to tickle the fancy of all fans of witches and wizards with Halloween on the horizon.

“Sally Cotter and the Censored Stone: A Harry Potter Parody,” is the work of Author Dean O’Carroll.

Sally is teenager who wants to live out her favorite movie series. Her wish comes to life when in her dreams Sally becomes a “transfer student at a kooky, unpredictable wizarding school filled to the cauldron’s brim with puns and Harry Potter references,” according to a press release.

Co-Directors for the play are Jeanette Odle and Shayla Ewing. Odle said the Drama Department, which is part of the Cultural Studies Program at PCHS, has presented a fall play for “many, many years — it’s a great tradition.” This is the first time this play has been presented.

“Sally Cotter is Harry Potter and is delightfully gender-bent, because she, as this kind of strong hero, is in love with the ‘Harry Potter’ books and is fascinated by them,” said Odle. “So the first scene of the play is her getting so invested and immersed in ‘Harry Potter’ that she dreams of that world, and her dreams are translated into the scope of the play.

“The play is set at Frogbull Academy of Sorcererness and Sorcerocity. Frogbull Academy is kind of the unexpected place — (Sally) thinks she’s going to Hogwarts. But she ends up at this other alternate reality or alternate dimension that is equally delightful but much more strange than Hogwarts.”

The play has 26 student actors and 47 students in support roles, such as props, sound crew, fashion and design, light crew, logo design and more. The students were very creative, said Odle.

“It’s a delightful farce — it’s a great comedy that has all of the ‘Harry Potter’ characters but in a way that is accessible to understand how funny they are and how quirky they are without actually having to read the books,” said Odle. “People who have read the books will really appreciate them because they are obvious parodies of those characters.”

Performances are slated for 6:30 p.m. Thursday and Friday with the doors opening at 6 p.m.; and 2 p.m. Saturday with the doors opening at 1:30 p.m. Faculty and staff are free of charge. Tickets are $3 for students and guests and parents tickets are $5. Tickets may be purchased at the Branch Finance Office at the high school or at the door 30 minutes prior to show time.