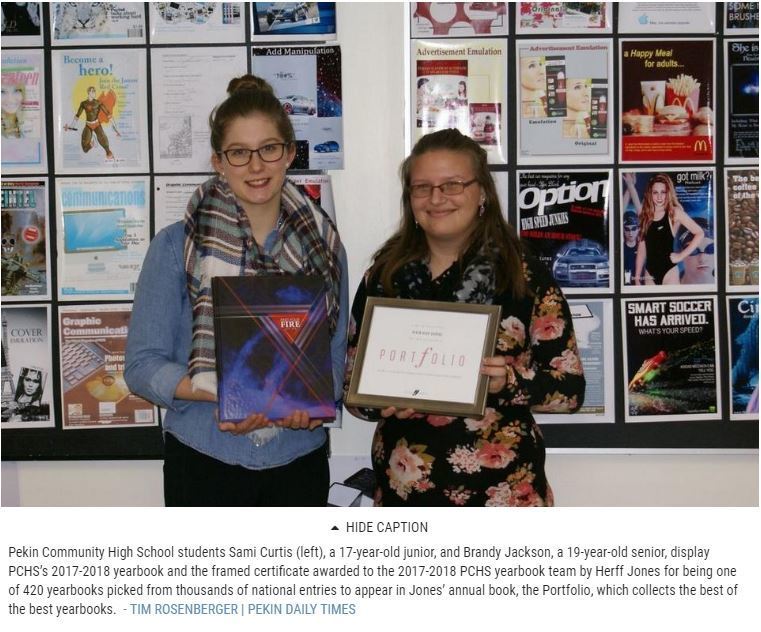 Pekin Community High School’s student yearbook team won out over thousands of other national entries when it was awarded last month for design work and its theme for its 2017-2018 yearbook.

“Being included in that book is the holy grail of yearbooks. To be selected for it was amazing,” said PCHS teacher and yearbook advisor Alyson Smith, who was also working on the yearbook when it won its first Herff Jones honor a couple years ago.

Annually, Smith heads a team of about 30 student who work together during the semester-long course, which students can take during the fall and/or the spring, to create each school-year’s book. Smith’s goal is always to do better than the year before.

“I just think we always grow every year, and we always compete with our yearbooks...We always send it out to competitions. So, we always want to get good feedback and grow from that feedback that we get in order to win more,” Smith said.

Smith also wants to get all the students in the yearbook, because that makes them feel like they’re involved and a part of something.

“It’s super easy to get the kid who’s in five different clubs and sports. They’re in there no matter what,” she said. “It’s more difficult to include the kid that doesn’t talk in class, or more specifically our freshmen are difficult for us because I don’t teach freshmen. So trying to get a hold of kids we don’t know is always interesting.”

Each yearbook has a theme and specific design style. The 2017-2018 yearbook’s theme was Find Your Fire. Its major design elements were fire — which partly visually manifested with the use of different fire colors like red, orange and yellow — and triangles, which appear throughout the book in different ways including sometimes containing text or photos. The two art pages were the ones singled out and printed in the Portfolio.

Sexton visits different schools and helps them teach journalism, how to do desktop publishing and how to write copy and take photos journalistically. More often than not, Sexton said, schools throw English and business teachers, who’ve never been trained in journalism, into that world. Herff Jones is there to assist.

“I work with a lot of schools in Illinois and even half of Iowa, and Pekin (Community) High School is really a gem,” said Sexton. “They’re an incredible school to work with, they have an incredible group of teachers, and Alyson Smith is at the top of all of that.”

Herff Jones was founded on the idea of enlightening students and engaging and appreciating their achievements, Sexton said. It’s something people see happen all the time with sports but not as much with things like journalism, she added.

“This is a major, major production that these kids put together,” Sexton said. “It’s a 256 page book that they sell to their community that they have published, and it just doesn’t get the weight that it should. So, I think one of the reasons that our company started this program when they did 24 years ago is because we wanted to give these people the pats on the back that we feel like they deserve.”

Some fear yearbooks have been in decline in recent years because of social media and the ease with which users can share photos and more with others.

Sexton has only noticed a decline in yearbook sales because of the state’s declining population, not because of social media use.

“Social media changes,” Sexton said. “What started out 30 years ago is no longer there, and I think that when kids get their book, it’s still a book...They can touch it, they can feel it, it’s tactile, their friends can write in it, and they can put it on a shelf and pull it down and it’s the same thing 20 years later.”

And for many schools, yearbooks are the only records they have of their history, Sexton said. The books serve as an all-in-one historical record for future school administrators and students to reference to find out who taught at the school, who attended as a student, what clubs were going on, and what the scores from all the sports teams were in a given school year.

“These kids get in and start learning the technology that they learn,” Sexton said. “They learn how to write a different way than you’re even taught in any of your English classes. They learn how to approach people and how to interview people and how to talk to people, and boy, social media’s kind of robbed us of that, so it’s a skill that we have to teach them again. All these magical things happen in a yearbook classroom.”

“I never thought we’d get an award for (the yearbook), because throughout the year, we were struggling, and we weren’t meeting the deadlines to get the pages sent off. So to find out our yearbook was honored, it feels like we did better than we all thought,” said 19-year-old PCHS senior Brandy Jackson, who’s been with the yearbook for three years and serves this year as its editor-in-chief.

Surprise or not, the honor was still appreciated by 17-year-old junior Sami Curtis, who’s been with the yearbook for two years and serves this year as the yearbook’s sports editor.

“I thought it was really cool, because you spend all year round working on this one book and to get awards for it is pretty amazing,” Curtis said.

Jackson spends at least two hours a day during the week on the yearbook, with occasional weekend work happening, and Curtis gives an hour of her day to it. They both look at yearbooks differently after being involved in their production.

“Before (you work on them), you kind of think it’s an easy job,” Jackson said. “It’d be easy putting in the photos and just writing a few sentences or whatever. I find it harder, because a lot more work goes in behind-the-scenes. It’s not just an in-school job. You have to go outside of school and take photos, interview people.”

Jackson and Curtis both like interviewing people, getting them all involved and feeling like they’re part of the school. Curtis also enjoys photography all the student experiences throughout the year and going through the book at the end of the year and treating it like a big memory book.

Unlike Sexton, Jackson seemed to have a more optimistic view on social media.

“I find social media being an advantage, because you can look on the social media to find out what events are going on and who was all involved and what they all did that day,” Jackson said.

Despite this advantage, Jackson likes that a yearbook, unlike social media, is permanent and doesn’t go away.

“I think yearbooks are important, because it captures the whole entire school year,” Jackson said. “It captures the students and the school that year. It tells you your records for that sports season.”

Curtis said yearbooks are a way to capture students’ accomplishments and put them where everyone can see them.

“You can see who’s done this throughout the year, who’s done that, and we have our Interesting People pages where certain people get highlighted,” Curtis said. “You get to see everything that they’ve done throughout their high school year...You can look back upon that, and you get to actually visually see, ‘This was what my whole school year was like.’”